Several people in the LGBT community criticized President Obama’s speech at the HRC dinner in Washington, D.C. on the evening of Saturday 10 October. Their principle complaint seems to be that we have heard these promises before. True enough, we have.

I remember being at Chaplains school at Maxwell Air Force Base in Montgomery, Alabama in the early 1990’s. At that time, President Clinton had just been elected. As a candidate, Clinton had promised to lift the ban on gay/lesbian people from serving openly in the Armed Forces. A Major stood before our class of officers and invited us to “brainstorm” about how we would change policies and procedures regarding gay/lesbian personal once the President lifted the ban. My peripheral vision caught a group of enlisted personnel operating recording equipment that was connected to our individual microphones.

Excuse me sir, but until the Uniform Code of Military Justice is amended, we are merely speculating here and we do not have the authority to do that. That stopped the discussion on the matter. A few years later, I learned that the exercise was, in fact, a trap. Its purpose was to ferret out those who were gay/lesbian and their sympathizers and to use the recorded information to force them out of the military. All of that was brought painfully back to mind when I had brunch on Sunday morning with veterans who are still advocating for a repeal of Don’t Ask Don’t Tell.

When I saw Lieutenant Dan Choi again on the stage of the March in front of the US Capitol building, we talked about his struggle. He looked at me, smiled and said, “Hey, we are both wearing our uniforms.” He was wearing his military uniform and I was wearing my clerical collar. I then thought to myself that most admirals and generals are straight and many of them do want to see Don’t Ask Don’t Tell repealed. While most of the Catholic hierarchy is gay and they don‘t want to see Don‘t Ask Don‘t Tell repealed, although some of them secretly desire to see a change in the Church’s stance on LGBT people. I guess the old adage still holds true, “you hate most in others, what you hate most in yourself.”

Yes, we have been asked to be patient for far too long. Some also criticized President Obama for failing to use the word “marriage” in his entire speech. Yes, the word was conspicuously absent from such a carefully constructed and rather comprehensive speech. All of those points conceded, the speech did have some considerable substance. The Anti-Hate Law bill which is about to be approved by the US Senate and which the President promised to sign within a few weeks is a considerable leap forward for LGBT people and their loved ones. It will mean that local authorities, who sometimes hold a bias against the LGBT community, will have to answer to Federal authorities and hold legitimate criminal investigations.

Another substantive piece of legislation, which will change the lives of countless LGBT persons, is the Employment Non-Discrimination Act (ENDA). This is pending federal legislation that would ban employment discrimination based on an individual's sexual orientation. The bill protects workers from discriminatory hiring, firing, promotion or compensation practices, as well as retaliation for reporting such practices. ENDA is also expected to be sent to the President’s desk for signature. These are not empty promises, but are concrete substantive laws that will change the quality of LGBT people’s lives by offering them REAL protections. For example, Bishop Steinbock “warned” priests in a FAX sent out the weekend before the passage of Prop 8 in California, that if Prop 8 were to be defeated, they would no longer be able to fire teachers for being gay/lesbian. By passing ENDA this practice could no longer take place.

On the “Promises List” were the repeal of Don’t Ask Don’t Tell and the repeal of the deceptively named “Defense of Marriage Act” (DOMA). Yes, these too need to be addressed. To date, all we have are promises from President Obama that he fully intends to repeal both of these hate laws. I recall a quote from Henri Belloc “Hope is a light diet, but very sustaining.”

I invite you to consider two points when you weigh the value of President Obama’s speech and of the promises, which he has made to us. First, consider the previous administration and realize what a HUGE difference in values and goals Obama represents. Second, consider his speech from the perspective of the National Organization for Marriage (NOM), the Knights of Columbus, the current leadership of the Church of Jesus Christ of Later Day Saints (Mormons), the current leadership of the Roman Catholic Church, and Fundamentalist Protestants organizations.

My father taught me to play chess as a small boy and I am forever indebted to him for this gift. Chess requires that you consider the game from the perspective of your opponent. Consider Obama’s speech from their point of view. The fact that the President of the United States of America has publicly committed to end prejudice towards LGBT people and is committing his administration to champion anti-discriminatory legislation is no small matter. When President John F. Kennedy gave federal support to African Americans in their struggle for Civil Rights, groups like the KKK and the late Governor Wallace of Alabama took notice and were very unhappy with the President. They knew that this was tipping the playing field against their advantage. I believe that we will remember President Obama’s speech in a similar light.

The next morning, I walked to Capitol Hill in Washington D.C. I was interviewed by a television crew and then went up to the stage area. I met several old friends, Rabbi Denise Egers from Kol Ami Synagogue, Lt. Dan Choi, Toby (who sang for us that day), and too many others to mention here. I will never forget the scene from the stage, looking out onto the Mall and the Washington Monument in the distance and seeing over 150,000 people filling that Mall and the Capitol Hill. 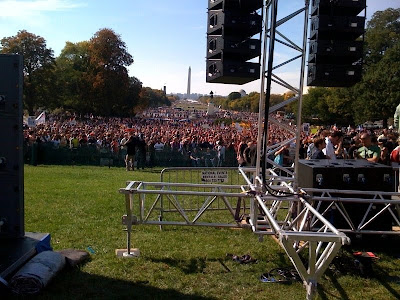 I cannot adequately express to you the overwhelming power of that scene. You see at one time, as a boy, I thought I was the only one. I thought that I was alone. I remember going to a bookstore in Bakersfield, California when I was about 35 years old. I waited until the bookstore was empty and went to the very small “Gay/Lesbian” section. I pulled out a slender book entitled “The Best Little Boy in the World” the autobiography of a gay man. When I read that book, I realized I am not alone.

On Capitol Hill, in the very bright afternoon sunlight, I looked out and saw a huge crowd of people from all across America. We are not alone! Together, we will ensure that no other human being EVER has to feel that he/she is the only one! Together, we will ensure that the words “with Liberty and Justice for All” are true in our land.
Posted by Father Geoff at 7:38 PM

Thank you for sharing this post, Geoff. I was bummed that I couldn't be there with you all. Thank you for your continuing optimism it a time when it's so easy to lose that quality.

Count me in as one of the Catholic "hierarchy" looking for a change in policy for GLBT persons still in the Church.

Great post Father, but unfortunately the church is once again going to release a letter signed by ALL the bishops about marriage and I hear the letter once again bashes gay couples, but of course in a very loving, compassionate way! Sometimes I think it's just too much to handle...Keep up the good fight for those who have lost the will!

Thank you for sharing the weekend with those of us who could not be there.
You and LT. Dan Choi are my heroes! You are both strong, articulate, charismatic LGBT leaders. I appreciate all of your hard work on gay and lesbian issues.
Jackie

Another excellent post, Father Geoff. I am somewhat emotional reading some of this and thinking about what you said. It is painful because to quote from you, some of the leaders of the Church have a "Shut up and sit in the back of the bus" attitude and that hurts. I am still trying to figure out why with all the gay priests and bishops that they can't stand up for gay people. "Don't ask, don't tell" doesn't seem to be working in the Church either. What about all the young gay people? With so many gay clergy the Church surely has the resources (but not the will) to help these kids and lessen their pain. I just have so many questions and want to understand.