On Tuesday , February 16th, I had the distinct privilege of addressing thousands of volunteers who had gathered at our State’s capitol for Lobby Day. They were there to meet with members of our state’s legislature and ask them to vote YES on HR5 and SR7. These two resolutions, if passed, would be an official statement by both houses of our State Legislature requesting the California Supreme Court to overturn Prop 8. For more information, please read my previous post entitled “Time to Act.”

I have received several requests to print a transcript of the my address to the volunteers. I have printed the text of my message here below.

Prop 8 is not simply about your right to civil marriage as important as that is. Make no mistake, Prop 8 is about your right to exist. Recently, I received an E-mail from a young man. He wrote: “I have spent all of my life trying to please other people. Twice, I have attempted to take my own life. Thank you for speaking for those of us who are not brave enough.”

Think back on your own life’s journey. Remember when you first discovered that you were gay/lesbian? Most of us were kids in middle school. Our greatest fear was being rejected by family and relatives. So, we learned how to “pass” out of fear and the need to survive; we learned how to lie. The cost of this was, of course, self-loathing. This is why there is a higher incidence of alcohol, substance abuse and teen suicide among gay/lesbian teenagers.

We learned how to be invisible in order to survive. My therapist pointed out to me that many professional gay/lesbian people remain closeted because their private practices or careers would be compromised, or destroyed if they came out. Right now, you might be thinking: “But, if I come out, it will cost me my job!” “Cry right here.” (I patted my shoulder).

The “cost” of not coming out is that a piece of you dies every day until there is very little left. The cost is a life lived in fear. The cost is that you have to play along and laugh when someone makes a “fag” joke. In his book, “The Secret History of the American Empire” author John Perkins makes an interesting observation. He says, “Most Americans know that Hugo Chavez is the President of Venezuela and that Evo Morales is the President of Bolivia. But, how many Americans know who the President of Kenya or Zimbabwe is?” Then, he goes on to drive home his point, “It is easy to kill invisible people.”

That is the real End Game of the Prop 8 proponents. They want to stuff us back into the closet. They want us to become invisible. They deliberately targeted California and pumped in tens of millions of dollars from throughout the United States to support Prop 8 because, in their own words, “California is a bellwether state.” They will go on to weaker states and target adoption laws, employment discrimination laws and fair housing laws. They will spend millions and mobilize to attempt to maintain “Don’t Ask, Don’t Tell” as a permanent feature of our Armed Forces. They want us to be invisible, to not count.

Many legislators and voters who have changed their position in our favor, have done so because a family member, a relative, a friend or a co-worker has come out to them. The proponents of Prop 8 know this too and that is why they want to stuff us back into the closet and make us invisible. As I said at the beginning, you are not just fighting for the right to civil marriage, you are fighting for your right to exist. So what can you do?

On Monday and Tuesday February 16th and 17th, thousands of people from throughout California went to Sacramento to lobby the State Legislature. The Assembly is considering HR5 and the Senate is considering SR7. These are resolutions which, if adopted, would ask the California State Supreme Court to invalidate Proposition 8 since, it constitutes not merely an Amendment but a Revision of our State’s Constitution.

The majority got to keep its right to marry and used Prop 8 to take away the right to marry from a minority (LGBT people) making the minority unequal under the law. In their original decision, the California Supreme Court corrected an inequality. Prop 8 reinstated unequal treatment under the law. If Prop 8 is upheld, it creates a dangerous precedent by allowing the majority to take away a fundamental right from a minority. This puts the rights of all minorities at risk.

Additionally, Prop 8 undermines the Court’s role, it takes away its ability to be the enforcer of equality and to protect any minority from unequal treatment under the law. Prop 8 puts all minorities at risk by stopping the Court from providing a “check” on the power of a simple majority. In this, Prop 8 constitutes not merely an Amendment of our State’s Constitution , but rather a Revision of the State’s Constitution. Since this is the case, Prop 8 should be overturned since it failed to follow the revision process which requires 2/3rds approval by the State Legislature AND a ballot majority vote.

What can you do? If you are a California state resident, please call and/or write your Assembly Member and Senator. Ask them to vote YES on HR5 and SR7. We’re not just fighting for the right to civil marriage for all Californians, we’re fighting to protect all minority groups in our state from discrimination.
Posted by Father Geoff at 7:44 PM 1 comment: 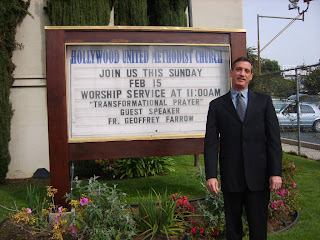 Father Geoff is up in Sacramento today lobbying the California State Assembly in conjunction with Equity California, but you can read all about his trip back to the pulpit at Hollywood United Methodist Church last Sunday by checking out the World O' Jeff.

See you there!
Posted by Father Geoff at 7:25 AM 2 comments: