As one of the thirteen people who handcuffed themselves to the White House Fence on 15 November 2010, I have been following the trial of Dan Choi with much interest; he has been in my thoughts and prayers through this whole ordeal. The reason I handcuffed myself to the Fence was to draw attention to an unjust law that has destroyed the careers of countless members of the U.S. Armed Forces, simply because they are members of a minority group.

At the time of this act of Civil Disobedience, the repeal of Don’t Ask Don’t Tell had been de-prioritized by the Obama Administration. The House of Representatives was about to fall under Republican Control in January 2011. Unless the lame-duck session of Congress, specifically the U.S. Senate, passed repeal legislation sent to them by the House, DADT would remain the law of the land. Our action put DADT repeal on the front page of media. That spotlight helped to move repeal forward in Congress.


Typically protesters are penalized with a $100.00 fine and misdemeanor count, which is about as serious as a traffic ticket. As the current Court proceedings clearly indicate, we were singled out for “special treatment” by Obama’s Justice Department. Twelve of us agreed to plead “guilty” with a plea agreement that dismisses charges against us. Our motives for accepting this agreement were: 1) some members of our group are teachers who would lose employment and be barred from their profession and become unemployed as a result. 2) All of us would have a federal crime on our records that would undermine future employment. 3) Twelve of us did not have the considerable financial resources to retain competent legal counsel and pursue costly litigation in Federal Court.


I am happy that Dan Choi was in a position to pursue this matter further. In doing so he is unmasking not only the true face of this Administration, but a corrupting arrogance on the part of the Federal government since the enactment of the Patriot Act, the de facto suspension of habeas corpus at Gitmo and the violation of the Geneva convention by the Bush Administration. Not to mention our nation’s engagement in a war against Iraq in violation of the Just War Theory. A war prompted by corporate greed for Iraq’s oil, as Alan Greenspan pointed out, and paid for with the blood of civilian non-combatants (collateral damage) as well as members of our Armed Forces.

Regardless of how you feel about LGBT Equality, there are other broader issues at stake here. As Chris Geidner reports in MetroWeekly,

The judge went on to say that he believed the prosecution was not selective in the traditional sense but rather was more subtle.


"It is impermissible," he told the courtroom, "for the U.S. Government to prosecute differently on the basis of the content of First Amendment speech."

We handcuffed ourselves to the White House Fence to obtain Civil Rights for our community in the Armed Forces. Dan has gone on to fight for all of our First Amendment rights. Specifically the rule of law and the notion that the government is accountable to its citizens, BRAVO Dan!

Consider carefully the comments by the President then and also, the insights/comments of the various panelists on the interview. Specifically, consider the comments on the Employment Non Discrimination Act.

Lt. Dan Choi begins his trial on Monday 29 August 2011 for his part in a protest at the White House that helped bring national attention (and move members of Congress) to repeal Don't Ask Don't Tell. He is being prosecuted by the Executive branch of government that is headed by Obama.

The Many faces of NOM's Maggie Gallagher. 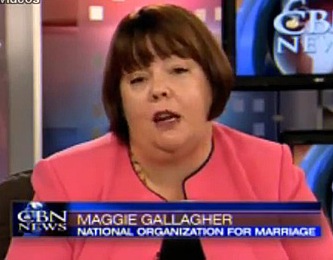 Click the link below to read a very insightful article by psychologist, Dr. James Walton, on NOM's Maggie Gallagher.


"As A Licensed Marriage and Family Therapist, I Have Just One Question to Maggie Gallagher, President of The National Organization for Marriage: "What’s It All About Maggie?" "
Posted by Father Geoff at 1:10 AM No comments:

Justice is to Law, as Healing is to Medicine


"Richard Loving was white; his wife, Mildred, was black. In 1958, they went to Washington, D.C. — where interracial marriage was legal — to get married. But when they returned home, they were arrested, jailed and banished from the state for 25 years for violating the state's Racial Integrity Act. Judge Leon Bazile wrote: "Almighty God created the races white, black, yellow, Malay and red, and he placed them on separate continents. ... The fact that he separated the races shows that he did not intend for the races to mix."


Justice Moreno quoted Judge Bazile’s sentencing statement. In August of 2011, Bazile’s statement is (almost) universally seen for what it is, a monstrously ignorant, unjust and bigoted statement. However, in 1958 there were many “God fearing A-mur-eh-kins” who wholeheartedly agreed with Bazile’s “Christian” theology.


Justice Moreno went on to debunk the false accusation of “activist judges.” He explained that the court does not seek to create new legislation; but rather, people come to the court to resolve real world disputes. Justice Moreno cited a case in which a woman had a hysterectomy, but still was producing viable ovum, she very much wanted to have a child. A female friend volunteered to carry the first woman’s fertilized ovum and give birth to the child. The first woman had her ovum fertilized by her husband’s semen at a clinic and then deposited into the volunteer.


During the pregnancy, the volunteer had a change of mind and the two women ended up suing each other in court. The court had to determine who was the lawful mother of the child. Pause here for a couple of moments and place yourself in the position of the Judge who had to decide this matter. Justice Moreno voiced the thoughts of many in the room, when he cited the dilemma of King Solomon having to adjudicate who was the true mother of the child.


Justice Moreno explained all the various indicators usually used to determine paternity (DNA, giving live birth, etc); however, in this particular case both parties could claim several of these. Finally, the Judge in the case used the “intent” of the parties to determine maternity and the corresponding parental rights/duties.


Advancements in human science required a reconsideration of the seemingly “unchangeable” criteria for motherhood. Yet, this “new” understanding had a very ancient precursor, since adoptive parents are not the biological parents of a child and yet, in many cases, they are much more the “true” parents than the biological parents. In short, the intent and the relationship trump the act.


I listened with great interest, since this is precisely the thesis of Professors Salzman and Lawler in their recent book, “The Sexual Person.” Todd A. Salzman is a professor of Catholic theology and chair of the Department of Theology at Creighton University. Michael G. Lawler is professor emeritus of Catholic theology at Creighton University. A review of their new book states,


“Two principles capture the essence of the official Catholic position on the morality of sexuality: first, that any human genital act must occur within the framework of heterosexual marriage; second, each and every marriage act must remain open to the transmission of life. In this comprehensive overview of Catholicism and sexuality, theologians Todd A. Salzman and Michael G. Lawler examine and challenge these principles. Remaining firmly within the Catholic tradition, they contend that the church is being inconsistent in its teaching by adopting a dynamic, historically conscious anthropology and worldview on social ethics and the interpretation of scripture while adopting a static, classicist anthropology and worldview on sexual ethics.


While some documents from Vatican II, like Gaudium et spes ("the marital act promotes self-giving by which spouses enrich each other"), gave hope for a renewed understanding of sexuality, the church has not carried out the full implications of this approach. In short, say Salzman and Lawler: emphasize relationships, not acts, and recognize Christianity's historically and culturally conditioned understanding of human sexuality. The Sexual Person draws historically, methodologically, and anthropologically from the best of Catholic tradition and provides a context for current theological debates between traditionalists and revisionists regarding marriage, cohabitation, homosexuality, reproductive technologies, and what it means to be human.”


I had an opportunity to visit with Justice Carlos Moreno after his lecture. In our conversation I thanked him for his role in serving justice and human dignity. Later that week I read a statement by the American Psychological Association,


“The American Psychological Association reaffirmed its support Wednesday for marriage equality for same-sex couples, noting that its annual convention taking place here this week provides an opportunity to call attention to the science supporting this position.


‘As the world’s largest organization of psychologists, we felt it was important to make a statement here and now to demonstrate APA’s unwavering support of marriage equality,” said APA President Carol D. Goodheart, EdD. “With the issue playing out so prominently in California, we are using the opportunity presented by our annual convention to present the growing body of science that is the foundation for our position, and that has influenced many of the legislators, judges and other public officials who are working to achieve this goal.”


On 06 September 2011 the California State Supreme Court will hear opening arguments regarding the question of legal standing of the “Yes on Proposition 8” proponents to appeal Judge Walker’s decision that Proposition 8 is unconstitutional. Justice Moreno speculated that the Federal Court thinks that these proponents stand on very “shaky [legal] ground” on Article Three to appeal Walker’s decision and therefore sought an opinion from the California Supreme Court regarding California State Law. The proceedings will be broadcast and since the Court has nothing else on the docket that day, it could be rather extensive. Get some popcorn and tune in.