Decision Day and our response 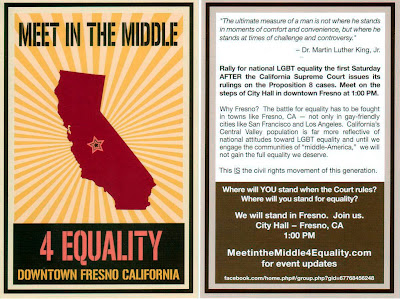 March 9th at 7:30 PM, I attended an open forum presentation by David Cruz, a professor at the USC School of Law who specializes in Constitutional Law and Civil Rights issues. A co-presenter was Irving Greines a distinguished appellate court attorney with 40 years experience, who frequently argues before the California State Supreme Court. Both of these legal experts offered their reviews and commentaries on the oral arguments, which were presented before the State Supreme Court last week.

In brief, they noted a tactical error on the part of those arguing for the overturn of Prop 8. We had five attorneys arguing our case; whereas, those arguing to uphold Prop 8 as lawful agreed on only one attorney arguing their case. It was explained that the tactical advantage of having only one attorney argue your case is that it offers both more flexibility and more time to the one attorney. There was also a concern expressed about the degree, or even the existence, of coordination among the five attorneys arguing for our side. Although, Mr. Greines did mention that there was some coordination between some of our attorneys.

While this may all seem technical, it does point to a fatal flaw in our organizing abilities to date, both in the No on Prop 8 campaign prior to the election on November 4th and in coordinating argumentation before the State Supreme Court. A man was asked what party he belongs to, the response was: “I don’t believe in organized political parties--I’m a Democrat.” The genius of an effective joke is that there is a kernel of truth at its core. Of course, it is somewhat easier for political/social conservatives to organize in a tight top-down organization since; they tend to place a premium on external structure and authority.

While discussing the strategies and tactics of the legal argumentation, Professor Cruz stated that while he disagrees with Kenneth Starr’s approach, he performed brilliantly. The one point on which his argumentation was most vulnerable was when he was asked about the right of a simple majority to take away the rights of a vulnerable minority. Mr. Starr answered, that yes the majority has that right. Professor Cruz stated, that should have caused the justices considerable pause--it did not.

This last point was the most disturbing point in the whole evening. Honestly, as I mentioned in a previous posting, I had received several phone calls the day of the hearing before the court. Therefore, I expect the court to rule against us on this matter. What is truly alarming is not the matter at issue, Prop 8 and same sex marriage, what is truly alarming is the line of argumentation employed by Mr. Starr in which he states that a simple majority may strip a minority group of their rights and the lack of expressed concern by the justices.

In 2006 the US Congress passed and President George “W” Bush signed into law the Military Commissions Act (MCA). The effect of this law was a casting out of habeas corpus laws which protect against unlawful and indefinite imprisonment. STOP and read that one more time. When I first read that in the morning newspaper, I was incredulous.

Since then the Executive branch of government, under George W. Bush had sanctioned torture, it should come as little surprise that a judicial body would condone the removal of civil rights of a vulnerable minority by a simple majority. This should however give pause to anyone who has thus far supported the “Yes on Prop 8” cause. Most especially, if they are part of a racial, religious or, gender minority or vulnerable group.

Professor Cruz eloquently stated, “The reason that a democracy can function is that minorities enjoy protection from a majority; otherwise, they would never consent to being governed by a majority.” This is a problem not of an “issue” (same gender marriage, etc) but of a “principle”(protection of minority's rights under the law). What is most disquieting about both government sanctioned torture and the stripping of civil rights from a vulnerable minority group, is that it threatens the very principles, which make a pluralistic democracy possible.

Even when we win on this particular issue, we are still left with the precedent that the government has done this and reserves the power to do so once more. I recall Benjamin Franklin’s response at Constitution Hall in Philadelphia when asked by a woman "Sir, do we have a monarchy or a republic? A republic Madame, for as long as you can keep it."

Another disquieting revelation was made when Professor Cruz announced that the “yes on Prop 8” side would most probably seek a referendum issue which would invalidate all same gender marriages which occurred in California between June 17th and November 4th 2008.

So now what? We continue to fight. On the day that the court announces it has decided to uphold Prop 8, various rallies will be held, public statements from LGBT organizations and empathetic religious and social groups. All of this is directed to the next step in our war against legalized marriage discrimination, a statewide referendum issue in November of 2010 that will amend the California Constitution to legalize same gender marriage. What this means is we will need your active help. We need to collect one million signatures in California from legal state residents to put this onto the ballot. This will be done by volunteers and not paid professional signature gathers. It will be the first time since the early 80’s that a ballot initiative will be put on the ballot by volunteer signature gathers.

It is helpful to view this as part of a process of change. In 2000 with the passage of Prop 22, Californians voted by a majority of 61.4% to restrict marriage to heterosexuals. In 2008 with the narrow passage of Prop 8, Californians voted to amend the state constitution to take away the right to civil marriage from same sex couples by only 52.2%. This is a loss of nearly 10% of voters on this issue in eight years. Eight percent who voted “yes” on Prop 8 lamented their vote and said they would vote “no” if they were given the option to do so. Well, we are going to give them that option. Younger voters overwhelmingly voted “no” on Prop 8 whereas, elderly voters overwhelmingly voted “yes” on Prop 8. Time is on our side, eventually, we will prevail.

Why not simply wait? Because, justice delayed is justice denied. Because, young LGBT people who cannot yet vote are being told that they are somehow “less” than everyone else is, that they are defective, that they can never form a union of love and life and have a home with someone they love. Because the same people who pumped tens of millions of dollars into California to strip same gender couples of their right to civil marriage, will now attempt to strip those same gender couples who were legally married of their marriage licenses. Because, other civil rights are in jeopardy for LGBT people both here in California and in the nation.