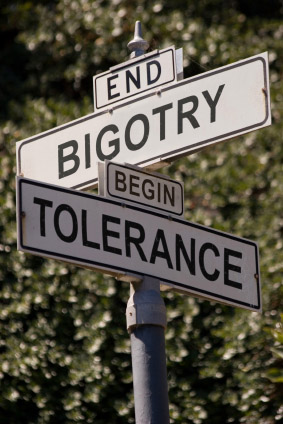 After almost a quarter of a century hearing confessions and counseling individuals and families, I know that sexual orientation is not merely a political, sociological or psychological issue. At core, what this is truly about is discrimination and its hurtful and harmful impact on simple human dignity and the lives of real people.


Bullying, employment discrimination, denial of service in the armed-forces under the recently repealed “Don’t Ask Don’t Tell”, denial of adoption rights, denial of Civil Marriage rights, all attempt to force LGBT people into lives of secrecy, shame, denial, fear and foster self-hatred. The Center for Disease Control’s Youth Risk Behavior Study of 1999 found that 33% of gay adolescents attempt suicide. A statistic that we were tragically reminded of last year when several young LGBT students took their own lives. That is the true cost of bigotry in the lives of countless LGBT people, their families and loved ones.


Cardinal George’s comparison of LGBT people who are simply seeking full Federal equality as American citizens with the KKK, a notorious hate group that seeks to deny full Federal equality to minorities, is both an inversion and a denial of the truth. George’s words constitute both a grave injustice and a moral outrage. By vilifying members of a minority group he targets them for prejudice and hate crimes.


A simple apology is insufficient, since an apology is merely a public announcement of one’s personal feelings. I believe that cardinal George is morally required to ask for forgiveness of the LGBT people, their families and loved ones, who he has vilified. His immediate resignation, upon asking for forgiveness, would manifest his sincerity and serve as a reproach to bigotry in our society.

I invite you to sign a petition from Change.org asking Cardinal George to resign as Archbishop of Chicago due to his defamation of LGBT people.
Posted by Father Geoff at 1:58 PM

Father Geoff
I amm happy to say I signed this already but I am sad to say as a member of the clergy these comments continue from the Hierachy
of our church.

I remember as a young person (74 now) I tried to kill myself twice.

The sin is not being gay...the sin is being a BIGOT...
Fr Vince

I know the depths of pain from which you speak. I am glad that you found the inspiration and strength not to take your own life. I am sure that you have helped countless people over the years, many of whom would not be here right now if it wasn't for your presence in their lives.

As more and more priest find the courage to speak out, justice will prevail.

Fr. Geoff, wanted to take the chance to wish you a Merry Christmas. Their Most HoliGraciRevnessnesses aside, it's this time of year that I remember that our Lord and Savior was born in barn, without draping heaps of watered silk or rings to kiss.

God bless and I wish you all the best for the New Year.

Yes, and God sent his angels to announce Jesus' birth to Shepherds.
People who's testimony would not be admissible at trials, due to their nomadic "lifestyle."

Comparing shepherds to what happens in the Castro is a BIG stretch.

Perhaps his emminence's words should have been more nuanced, but what he's striking at is not the sexual orientation of people, but rather the politicization of said orientation.

The Jerome Biblical commentary says the following regarding the shepherds in Luke 2:8

“The poor, as typical of Luke, are the first to receive the message of salvation in Jesus’ presence among men. … Another Israelite tradition, however, held that the shepherds were so destitute as to be always on the point of stealing and therefore completely untrustworthy.”

Taken in conjunction with the fact that it was women, another group held suspect by religious authorities of their day, to whom the Resurrection was first revealed and therefore, the first messengers chosen by God; no it is not that much of a “stretch.” It seems that God delights in lifting the lowly to humble the proud.

As regards the “politicization” of sexual orientation, it is “his eminence” (cardinal George), the Catholic Conference of Bishops, and their surrogates (the Knights of Columbus and NOM) who have politicized this issue. They have done so by consistently opposing, Employment Non-Discrimination, the repeal of Don’t Ask Don’t Tell, Adoption Rights and Marriage Equality.

Yes, Peace is good; however peace is incongruent with injustice. Therefore, if you want peace, work for justice.

I respectfully suggest that it is the Curia and the various bishops and their conferences who have politicized our orientation, by singling it out for special condemnation.

Benedict XVI branded gays "the destruction of God's creation." Cardinal Barrigan, Prefect Emeritus for Healthcare Workers, called gays as "an insult to God" who "will never enter the Kingdom of Heaven." Cardinal Grocholewski, Prefect for Catholic Education, labeled gays “a deviation, an irregularity, a wound.” And Cardinal Bertone, Secretary of State, asserted a direct, causal relationship between "homosexuality and pedophilia" (when virtually every study shows the exact opposite).

Benedict XVI expressly excused violence against gays, when he wrote that when gays push for legal freedoms, "neither the Church nor society at large should be surprised when other distorted notions and practices gain ground, and irrational and violent reactions increase."

The cake, however, is taken by Archbishop Apuron of Guam, who in an encyclical that Rome has done nothing to correct or condemn, praised "Islamic fundamentalists" because they "clearly understand the damage that homosexual behavior inflicts on a culture. That is why they repress such behavior by death." One shade short of calling on the faithful to murder their gay brothers and sisters. Rome nonetheless seems conceptually in line with these sentiments, given that it won't even condemn a bill as vile as Uganda's "kill the gays" legislation--although has taken time to praise Uganda for its kindness to the institutional church (what's a few lives in view of that?).

And his 'Eminence,' the Archbishop of Chicago, accuses the gay community of politicizing their orientation, of acting like the KKK? The sad truth is that the Church politicized orientation long before. No one on our side mentioned disrupting mass or engaging in any illegal conduct, or depriving his Eminence or his supporters of their First Amendment rights (while yet denying us our 5th and 14th Amendment rights).

The Church has in so many ways wondered wide of the track Christ set her on. Ask yourself, Fr. Colin, do the Archbishop's words mirror Jesus? The truth is that the Church, from her head, comes from a place of hate and malice towards gay people, something she doesn't really try to hide.

The Church has waged and continues to wage war on LGBT. We've become totems for a hierarchy that fears the modern world, that cowers behind silk and smoke, calling it purity. There is no excuse for the Archbishop's insulting comments. He should show humility and apologize.

The Cardinal attempted to "backpedal" from his earlier statements: (quoting) "Obviously, it's absurd to say that the gay and lesbian community are the Ku Klux Klan, but if you organize a parade that looks like parades that we've had in our past because it stops us from worshipping God, well, then that's the comparison, but it's not with people and people — it's parade-parade."
So apparently, he just doesn't like "parades?"
I'm nowhere near naive enough to believe that the Cardinal would resign, or even read the texts in the petition. He said exactly what he meant, and it earned points for him among his peers in the USCCB and Curia.

Thank you for your witness on behalf of LGBT people of faith! I just added your blog to the blog roll at the Jesus in Love Blog where I write about LGBT spirituality and the arts, including queer saints. I believe that it is appropriate to compare the shepherds at Jesus’ birth to the outcasts of today… and it’s likely that there were gay men among the shepherds who were visited by angels that night.

Thrust into being the patriarch of a struggling family of 3 children all of us sharing only their mother in common who had baptized each in the Catholic church while never attending mass,it was Father Farrow we found at Holy Family of Visalia CA as I sought to fulfill the promise made to each child. Those were trying times, battling generations of compounded neglect in the family. For example my wife had lived 29 years with head lice, it was a 7 year struggle to awaken and rid the whole of the extended family of lice that my youngest would no longer be exposed to it.
I couldn't have done it without Father Farrow, each mass evoked tunnel vision as his passionate message seemed tailored to me. The mental strength and resolve I drew from each mass carried my soul. I moved the family away from the poverty stricken central California region a few years back to forge better for the kids. One of my children now in college whose faith has carried me since leaving Father Farrow is struggling to find employment and housing and I went looking for him to ask for his prayers. Finding one of my favorite most cherished of the Lords Angeles who feel as though they were dispatched to carry me being hauled of in shackles from the White House lawn brought me to tears.
I pray for comfort, peace, and a full arsenal of the Lords tools to grace and promote your work and life Father Farrow. I will continue to learn about your journey, but as no other Priest has touched my very soul as you I scream to the church "What have you done!"